Our Parishes and Schools Emblems 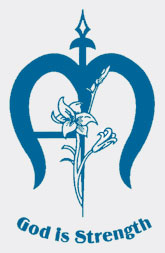 The traditional symbols depicting St. Gabriel in art and illustration are the shield, the spear and the lily. The letters A and M refer to St. Gabriel’s greeting to Mary.

In Latin this greeting is Ave Maria – Hail, Mary. The name Gabriel means God is strength.

Our parish motto God is Strength speaks of our trust in God’s power, mercy and love, and our firm conviction that all things are possible through faith in God. 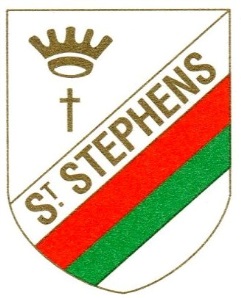 The parish emblem draws its inspiration from our patron Saint Stephen of Hungary. Stephen was born between 970 and 975 in Esztergom and died in 1038. He was born a pagan but converted to Christianity in his early youth and received the Christian name by which we know him. Stephen is regarded as the first King of Hungary. For his coronation in 1000 he requested that a crown be sent from Pope Sylvester II. He committed himself to his Christian faith and was a staunch supporter of the Church. He was canonised in 1083.

The emblem bears the crown, a Cross, and the green, white and red of the Hungarian flag.