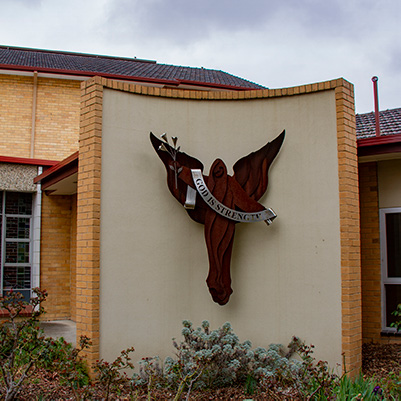 In the Old Testament St Gabriel, the archangel, helps Daniel to understand his visions (cf. Daniel 8:15 and 9:21).

In the New Testament Gabriel appears to Zechariah to announce that he and his wife Elizabeth are to have a son. Their son was John the Baptist. Gabriel visits Mary to announce to her that she was to be the mother of Jesus – God’s own Son. Gabriel also appears to Mary’s betrothed, Joseph, to reassure him of Mary’s fidelity - she has conceived the child within her by the power of the Holy Spirit.

The name Gabriel means The Strength of God.

The sculpture of St. Gabriel (facing Viola Street) was unveiled and blessed on October 13, 2002. It is constructed of steel and designed to oxidise slowly. The design is based on the traditional Christmas angel of nativity scenes and reminds us of the role played by Gabriel in announcing the conception and birth of the Lord Jesus.

The sculpture was designed by Melbourne architect, Arthur Andronas, who was also responsible for the renovation of the church in 1999. Ben Fries, a Melbourne silversmith and craftsman, made the sculpture. He also made the sanctuary lamp, candlesticks, lectern sculpture and organ rail inside the church.

The archangel, symbolising us as a parish, is depicted as a messenger of good news to the wider community, proclaiming God is Strength by the banner he carries. This banner (in stainless steel) is not subject to the elements; for God is all-powerful, God is with us, and we are not afraid.

Gabriel proudly carries a lily (also in stainless steel) proclaiming the perpetual virginity of Mary, the Mother of God, and reminding us of the Incarnation of Jesus Christ for our salvation - the eternal Son of God made flesh in her womb by the power of the Holy Spirit. The three flowers on the one stem symbolise the Trinity. 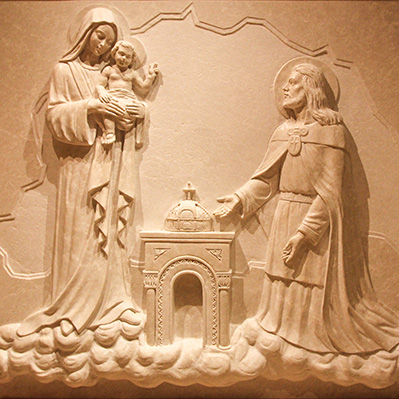 Stephen was born around 969 in Hungary. At the age often he was baptized with his father Geza. At that time many Hungarians or Magyars as they were known were pagan. At the age of 22 Stephen succeeded his father as Governor of the Magyars.

Stephen began a number of wars to unite the country. At the conclusion of his goals, Stephen asked Pope Silvester II to Christianize Hungary and to crown him King. The Pope agreed and Stephen was crowned King by the first Archbishop of Hungary, St Atrik in 1001. Stephen then set about establishing Christianity throughout Hungary.

King Stephen completed the establishment of the Monastery of St Martin which was begun by his father and saw to it that Magyar priests became available and churches were built throughout the country. He required that every tenth town should have a church and a school supported by a priest. The schools were to teach the children about Christianity, reading and writing.

Stephen also took particular interest in the poor. He would often disguise himself and distribute money to the less fortunate. King Stephen was a strong and fearless ruler who enforced just laws. He died in 1038 and was proclaimed a saint by Pope St Gregory VII in 1083.